This update contains over 200 new features, including the following:

* Normal carrier data rates may apply. Messages will be sent as SMS when iMessage is unavailable, carrier messaging fees apply.

What are you looking for?


Questions: Guess what people are looking for?

Chrome: A browser that combines a minimal design with sophisticated technology to make the web faster, safer, and easier!

Micky Mouse to undergo makeover in 2010!

Wednesday, November 4, 2009 19:30
– ( ) Disney Will Make Over Mickey. Why? To Make Us Like Him. http://bit.ly/2RGlBG
…LOS ANGELES — For decades, the Walt Disney Company has largely kept Mickey Mouse frozen under glass, fearful that even the tiniest tinkering might tarnish the brand and upend his $5 billion or so in annual merchandise sales. One false move and Disney could have New Coke on its hands.
Enlarge This Image 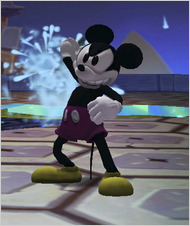 Mickey as he will appear in the video game Epic Mickey. The game, to be released next fall, will show the character’s darker side.

Go to your Portfolio » 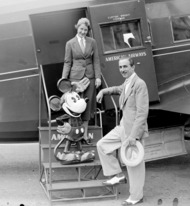 Walt Disney with his creation Mickey Mouse, in 1933.

Now, however, concerned that Mickey has become more of a corporate symbol than a beloved character for recent generations of young people, Disney is taking the risky step of re-imagining him for the future.

The first glimmer of this will be the introduction next year of a new video game, Epic Mickey, in which the formerly squeaky clean character can be cantankerous and cunning, as well as heroic, as he traverses a forbidding wasteland.

And at the same time, in a parallel but separate effort, Disney has quietly embarked on an even larger project to rethink the character’s personality, from the way Mickey walks and talks to the way he appears on the Disney Channel and how children interact with him on the Web — even what his house looks like at Disney World.

“Holy cow, the opportunity to mess with one of the most recognizable icons on Planet Earth,” said Warren Spector, the creative director of Junction Point, a Disney-owned game developer that spearheaded Epic Mickey.

The effort to re-engineer Mickey is still in its early stages, but it involves the top creative and marketing minds in the company, all the way up to Robert A. Iger, Disney’s chief executive.

The project was given new impetus this week with the announcement that, after 20 years of negotiations, the company has finally received the blessing of the Chinese government to open a theme park in Shanghai, potentially unlocking a new giant market for all things Mickey.

Disney executives are treading carefully, and trying to keep a low profile, as they discuss how much they dare tweak one of the most durable characters in pop culture history to induce new generations of texting, tech-savvy children to embrace him. Disney executives will keenly watch how Epic Mickey is received, to inform the broader overhaul.

Keeping cartoon characters trapped in amber is one of the surest routes to irrelevancy. While Mickey remains a superstar in many homes, particularly overseas, his static nature has resulted in a generation of Americans — the one that grew up with Nickelodeon and Pixar — that knows him, but may not love him. Domestic sales in particular have declined: of his $5 billion in merchandise sales in 2009, less than 20 percent will come from the United States.

“There’s a distinct risk of alienating your core consumer when you tweak a sacred character, but at this point it’s a risk they have to take,” said Matt Britton, the managing partner of Mr. Youth, a New York brand consultant firm.

In Epic Mickey, the foundation of which a group of interns dreamed up in 2004, the title character still exhibits the hallmarks that younger generations know: he is adventurous, enthusiastic and curious. “Mickey is never going to be evil or go around killing people,” Mr. Spector said.

But Mickey won’t be bland anymore, either. “I wanted him to be able to be naughty — when you’re playing as Mickey you can misbehave and even be a little selfish,” Mr. Spector said.

In many ways, it is a return to Mickey at his creation. When the character made its debut in “Steamboat Willie” in 1928, he was the Bart Simpson of his time: an uninhibited rabble-rouser who got into fistfights, played tricks on his friends (pity Clarabelle Cow) and, later, was amorously aggressive with Minnie.

Epic Mickey, designed for Nintendo’s Wii console, is set in a “cartoon wasteland” where Disney’s forgotten and retired creations live. The chief inhabitant is Oswald the Lucky Rabbit, a cartoon character Walt Disney created in 1927 as a precursor to Mickey but ultimately abandoned in a dispute with Universal Studios. In the game, Oswald has become bitter and envious of Mickey’s popularity. The game also features a disemboweled, robotic Donald Duck and a “twisted, broken, dangerous” version of Disneyland’s “It’s a Small World.” Using paint and thinner thrown from a magic paintbrush, Mickey must stop the Phantom Blot overlord, gain the trust of Oswald and save the day.

Consumers will not be able to buy the game before fall of next year. Anticipation is intense. “Wow! This is amazing,” said Eli Gee on GameInformer.com. “I’m really… REALLY excited.”

Other observers are less impressed. “The approach warrants a lot of caution given the difficulty that publishers have had gaining traction on the Wii,” said Doug Creutz, a media analyst at Cowen and Company.

Industry veterans with experience in the family niche think that the Disney brand can overcome such hurdles.

“This is a huge opportunity to create more relevancy for Mickey and pull him into the fastest-growing entertainment medium,” said Jim Wilson, the chief executive of Atari’s North American business. “If it’s a good game — and given the strength of the developer and I.P., the likelihood of that is high — people are going to buy it.”

Not that the idea is not radical. “I was told to withhold judgment until I had seen the whole pitch,” said Graham Hopper, executive vice president for Disney Interactive Studios.

Disney has big video game ambitions, spending at least $180 million on their development this year alone. It has had successful spinoff titles, but no true self-published blockbusters. Disney generated about $86 million in retail sales from January to September in the United States, according to NPD data. Nintendo of America, the leading seller of games, had about $1 billion in sales.

Mr. Iger solved a right problems with the game by making a deal with NBC Universal in 2006. In the negotiations, Mr. Iger persuaded NBC Universal to trade the Oswald rights for rights to Al Michaels, the sportscaster. NBC wanted Mr. Michaels for its new football franchise and Mr. Michaels wanted to go, but Disney held him in a longtime contract through itsESPN unit.

In the interim, Mr. Spector has struggled with the correct 3-D model of the mouse, consulting with animators and John Lasseter, the Pixar co-founder.

Considerable effort has gone into instilling a backdrop of choice and consequence. Players can either behave in an entirely happy way and help other characters — and have an easier go of it in the wasteland — or choose more selfish, destructive behavior with a harsher outcome, including a Mickey that starts to physically resemble a rat.

“Ultimately,” Mr. Spector said, “players must ask themselves, ‘What kind of hero am I?’ ”

When it comes to Mickey, Disney is asking it, too.